I had the same worries, travellers I met told me to skip Vang Vieng because they didn’t like it when they were there. It was a centre for partying filled with your typical 18-year-old male Aussie backpacker dressed in what used to be a shirt at one point. Not to pick on young Aussies, but the proximity of Australia to Southeast Asia just garners more of them. Just like you’d have usually more North Americans travelling South America than Australia. Not always true, but stereotypes can be fun sometimes.

But that’s all old news now.

So the story is that Vang Vieng used to be a crazy party town, but when it got too crazy and tourists started to die from drinking and drowning, the government stepped in and took it down a notch. This Wikipedia excerpt explains:

“In the third quarter of 2012, the Lao government carried out a crackdown in Vang Vieng, pulling down all the riverside bars. Tubing is still going on, but in a much more controlled fashion.

One climbing instructor was reported to have said that visitors are now spending more time participating in activities such as climbing, kayaking, and mountain biking. “Vang Vieng has come back to us again… it’s like it used to be”, he was quoted as saying.”

It’s almost as if Vang Vieng is a beautiful child actor, who had her wild days with drugs and alcohol but is now reinventing herself as quite a talent.

I really liked Vang Vieng actually, to my surprise. It’s pinnacle shaped mountains, valleys and hot air balloons make it a picturesque town during sunrise and sunset. The Other Side bar and Banana Restaurant are pretty cool places to catch the sunset.

I only stayed for one night and went climbing in the mountains all day, which was really nice. Used to western safety, I have one huge complaint that the gear was really old, unsafe and needs to be replaced. I had a huge hole in my shoes and my harness was ripping at the seams in some places. If the climbing schools don’t replace them soon, Vang Vieng will experience deaths not from drowning, but falling. 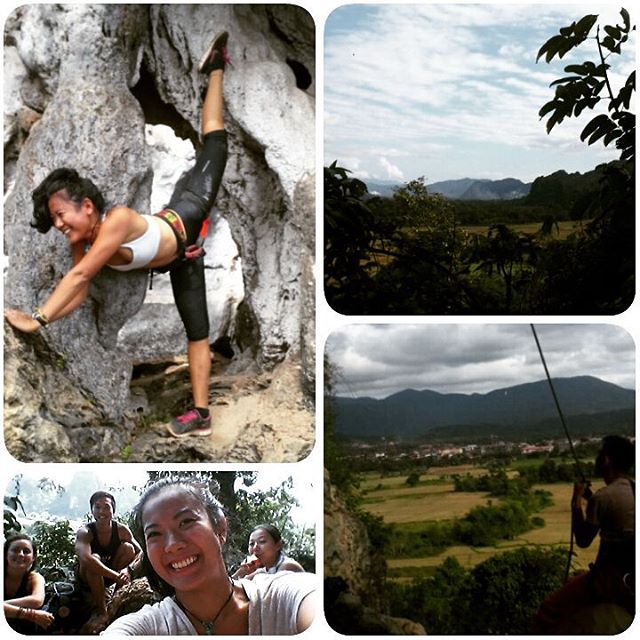 I wouldn’t have minded staying a day longer to go to the lagoons and maybe a cave or two. I also enjoyed lounging in the bars watching Friends. It was relaxing in it’s own way.

So if you’re travelling after 2012, which you most likely are unless you have a time machine, it’s definitely worth a visit.