Time has flown right by and it’s almost time for me to leave this beautiful island. 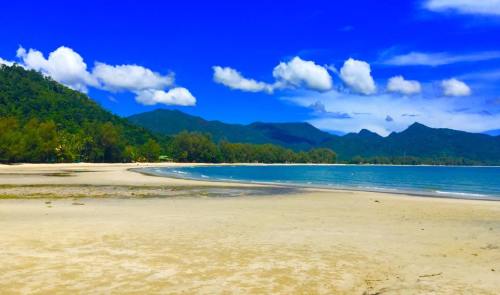 I remind myself of the reasons to leave.

And so with a heavy heart, I must go and get my affairs in order. I must re-enter into the structures of society and the boring old routine of consumerism.

What is that routine you ask? It’s simple. You work to get more stuff, work to pay off that stuff, have kids because everyone else is having them, unable to spend time with those kids because you need to work to pay for kids’ stuff, then work some more so that you can stop working and retire so that you can then spend your feeble days waiting out your death. It all seemed less than appealing to me. Somewhat pointless.

I would rather just spend my days here sipping coconuts in a hammock with my man and my dog, Koya, who would run around playing in the sand chasing crabs or something and having a good time as dogs always so. And not having the stuff that everybody is programmed to want.

I envy my dog’s life. Humans are to me the most blind of all the species. We created a society full of rules and structures and now we screwed ourselves over working in little cubicle cages for 8-10 hours a day with the inability to see much of the sun, let alone run and play in the sand.

Some form of paper money or numbers on a screen control our lives and determines how important a person is, rather than their traits of integrity and honesty. I suppose you do need some structure as dogs do in their dog world, but I think we humans took it a tad too far. It is what it is.

Societies do change, it just takes thousands of years to do it. In ancient Egypt, slaves were worked to death to build pyramids. And this is the same for other ancient civilizations. And what were the slaves thinking? They probably just accepted that that was life and I need to carry this huge chain on my back, attached to this huge stone. Then the Roman Empire came a few more thousand years later, a much more improved, more ethical society. Yet, still with slaves, crucifixion and death games as a norm.

Sure, we realized slavery is bad now (in this century, it took us that long), and we’re a far cry away from being in chains…but I hope you see my point that sometimes the reality you live in, isn’t always a reality that needs to be. Who knows? Maybe in a couple thousand years, our post-decessors will get it right. Maybe they will only work 5 hours a day, spend lots of time with their families and all energy will be green, and people will be happier and healthier.

Hey, you never know, right? There’s always room for betterment and for improvement. But for time being, It is what it is.

And so I take pictures of dozens of real estate ads instead. Dreaming of owning a small resort here, have a lush garden for vegetables and fruits, and teach yoga so I can earn a humble income to pay for simple pleasures such as coconuts and hammocks. Hey, you never know, right?